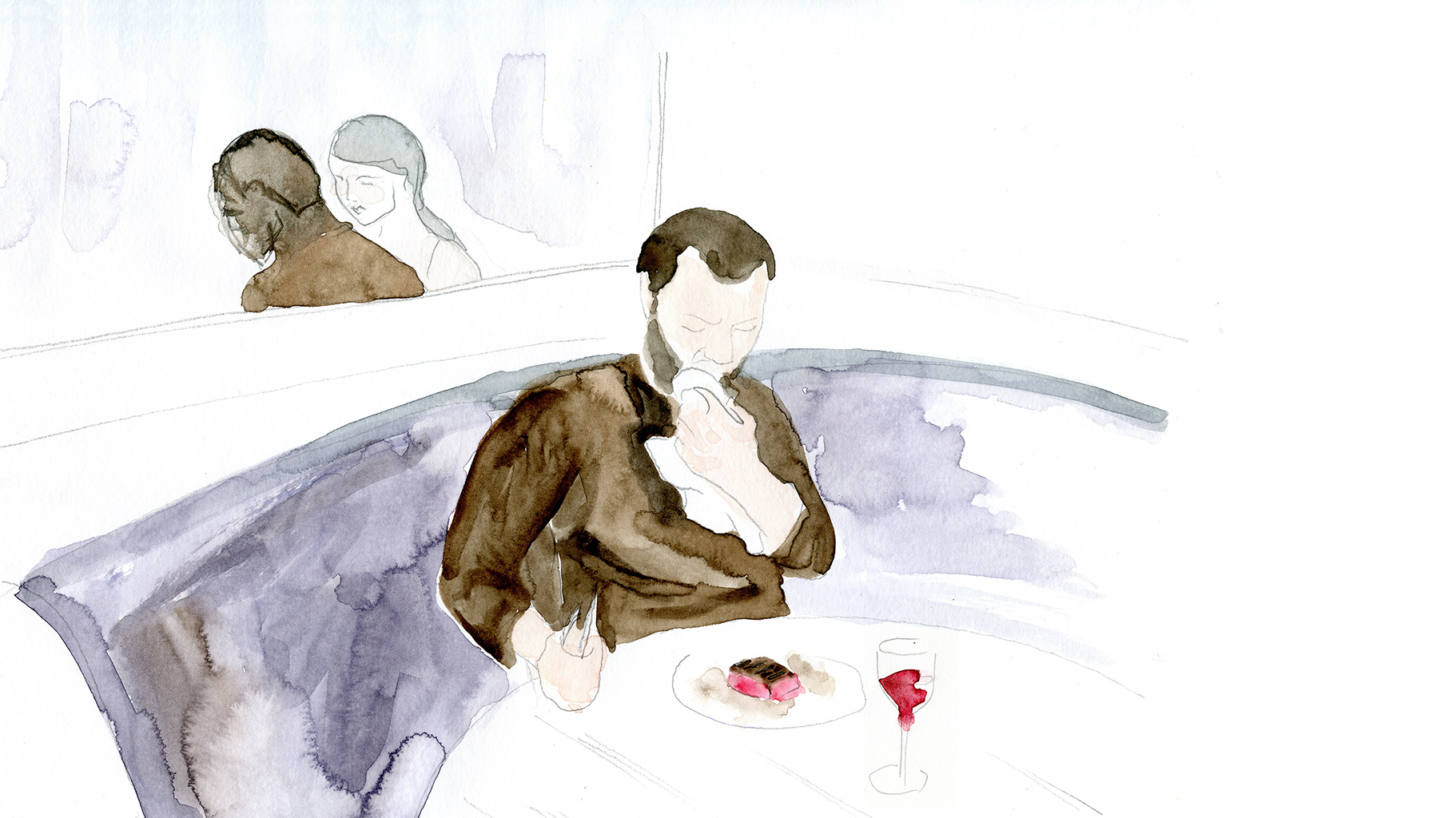 Raw langoustine with yuzu and hibiscus

Peel the langoustines out of their shells and remove the intestinal tract and roe (if any). Finely chop the flesh and divide into four equal portions. Place each portion between two sheets of parchment paper and use a rolling pin to flatten. The flattened portion should fit the size of a plate. Transfer everything to the freezer. It is important that the flesh is frozen hard and it is therefore advantageous to prepare the langoustines a day in advance.

Squeeze all the juice from the yuzu. Strain and blend with the heavy cream. Place somewhere warm for about an hour or until thickened.

Pulverize the hibiscus in a blender or coffee grinder. It should yield a fine powder. Strain through a sieve and store in a dry container.

Remove the parchment paper from the frozen langoustines and let thaw on a cold plate. Add a little salt. Spoon the yuzu cream onto the edge of the plate. Dust the hibiscus powder over the dish, using a fine mini-strainer.

Bake the whole onions at 200 degrees Celsius for about 30 minutes until tender (the baking time will depend on the size of the onions). Slice off the bottom of the onions and split each in half lengthwise. Divide each onion half into wedges and sprinkle with grated lemon peel, salt, Sichuan peppercorns, salt and sesame seeds.

Arrange the onion wedges on a plate and pour sauce into each wedge. The dish can be eaten as finger food.

100 dishes and recipes that evoke the spirit from Geist

Snip off the little capers pods that remain on the stem of ramps after they have flowered. Add an amount of salt that equals five percent of the total weight of the capers pods and seal in a mason jar. Store in a cool place for at least one month before using.

Trim the spinach, rinse thoroughly and spin in a salad spinner. Rinse the padrón peppers and slice into neat rings. Rinse the samphire and let dry. Nip off the tough ends and chop the rest roughly.

Divide all the ingredients into two equal portions so that the dish can be made in two batches or on two pans.

Heat a pan with grapeseed oil and add padrón peppers. Add samphire and spinach and shake the pan lightly to distribute evenly. Let stand until the spinach starts to collapse in the edges, then fold together. Remove the pan from the heat and fold grated Gruyere into the spinach. Transfer the spinach to four plates and add bronze fennel, ramp capers and salt.

The Rage, The Tribute, The Introduction, The Reunion, The Journey

Turbot with fennel ravioli on gruyere

Rinse and dry the fennel bulbs. Slice thinly on a mandoline and transfer to a pot, adding the grapeseed oil. Bruise the lemongrass stalk with the back side of knife, then transfer to a tea bag along with star anise. Add the tea bag to the pot. Place a piece of wet parchment paper over the fennel and roast at medium heat until tender and caramelised. It may stick a bit to the bottom of the pot. Remove the pot from the heat and let stand for a few minutes. Stir the pot well so that the caramelised bits in the bottom dissolve. Return the pot to the heat. Let the fennel become tender and golden, then remove the tea bag. Blend the fennel smooth and add salt to taste. The consistency must be very thick. Transfer the puree to a piping bag.

Slice Gruyere cheese as thinly as possible, using a deli meat slicer if possible. Cut out circles of the cheese using a cutting ring about four centimetres in diameter. There should be 16 circles per dish. Place half the slices on a parchment-lined baking pan. Pipe a dot of fennel puree on the middle of each circle of Gruyere cheese and carefully place another circle on top, so that it floats on top of the puree. Bake the raviolis at 90 degrees Celsius, until the top slice of cheese has melted over the fennel puree and touches the bottom slice. Remove the raviolis from the oven and let them cool slightly, then turn them over and season with black pepper. Blend the remaining cheese with 100 grams of melted butter and strain. Pour off the water from the cheese fat when cooled.

Melt the remaining 100 grams of salted butter slowly without boiling. Pour into a transparent bowl, so the clarified butter can be seen clearly on top and the whey rests on the bottom. Let stand for a few minutes while it separates completely. Use a strainer to separate the clarified butter.

Fillet the turbot from the bone, remove the skin and divide the fish into eight pieces of equal size. Cook the turbot in clarified butter on a hot pan. Cook the prettiest side first, so that it will face upward when serving.

Swirl a spoonful of yogurt onto a plate and add a few drops of cheese fat. Place two pieces of turbot on the plate and arrange four raviolis on each piece of turbot.

Remove the legs from the wild ducks (reserve these for another use), leaving as much skin on the breasts as possible. Remove the wishbone and innards.

Bake the Hokkaido squash in the oven at 200 degrees Celsius for an hour, then let rest for about 30 minutes. Slice open the squash, remove the seeds and scrape out the flesh. Squeeze the lemon and orange and strain the juice. Blend the Hokkaido squash to a smooth pure, adding orange and lemon juice to taste. Sweeten with Acacia honey, if needed (we never add salt).

Brown the salted butter until foamy. Add espresso and maple syrup and keep the sauce warm.

Grill the skin of the wild ducks on all sides. Roast the wild ducks in the oven at 200 degrees Celsius for 8-10 minutes, depending on their size, and let rest for five minutes. Slice off the breasts and lay them skin-side down on the grill for a few seconds, then slice thinly and season with salt and toasted crushed coriander seeds.

Fan out slices of wild duck on a plate. Place a spoonful of Hokkaido squash puree on the side and pour the brown butter-maple syrup-espresso sauce over the duck.